So after a much needed nights sleep in the very “Budget” Ibis hotel in Issodun I met up with my translator Maxime Barbier who had spent the night in his van.

I did offer to pay for a hotel room for Maxime but he declined. Maybe he knew something about Ibis Budget that I did not!

We headed off together to visit Hubert Charpentier. Hubert is a farmer just south of Issoudun. He has been on the farm for 20 years but has spent a large amount of that time away as a researcher for CIRAD in Africa researching No-till and living mulches in Cote D’Ivore and Madagascar. Hubert came to my attention when Maxime sent me this link:

I thought that I had to meet this guy and see the amazing things he is doing. Once we had arrived at his beautiful farm we spent about 2 hours inside talking and discussing what he has been doing and he really got into some seriously good detail.

So Hubert has a rotation of Winter Peas, Winter OSR, Winter Wheat, Durum Wheat. He also had a few spring peas. He also has been No Till for 15 years. He first plants the Lucerne with the Winter OSR as a companion crop. He says you have to start there in the rotation as a cereal would be too competitive for the Lucerne.

Then after the OSR is harvested the light gets down to the Lucerne and it grows all summer. Though at the time I was there you really struggled to see the Lucerne in the bottom of the OSR. 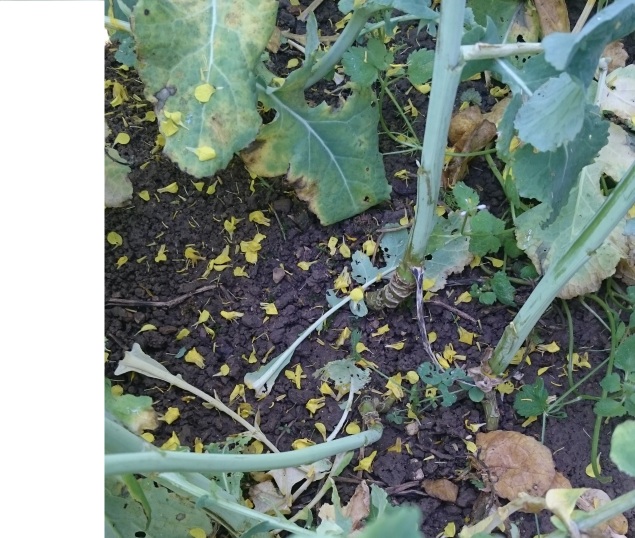 Lucerne somewhere in the above picture

Then Hubert will drill Winter Wheat direct into the Lucerne in October. He uses no grass weed herbicides in any of his wheat but does use BLW herbicides sometime for weeds and to supress the Lucerne.

Below is what the Lucerne looks like in the wheat this week:

The main reason Lucerne is a good living mulch is that it is a very deep rooting plant and so does not compete with the wheat for water. Unlike white clover which is shallower rooting. I asked Hubert to show me the roots of the Lucerne. So he dug a hole and the wheat came out of the ground but the Lucerne would not budge, the roots went on and on: 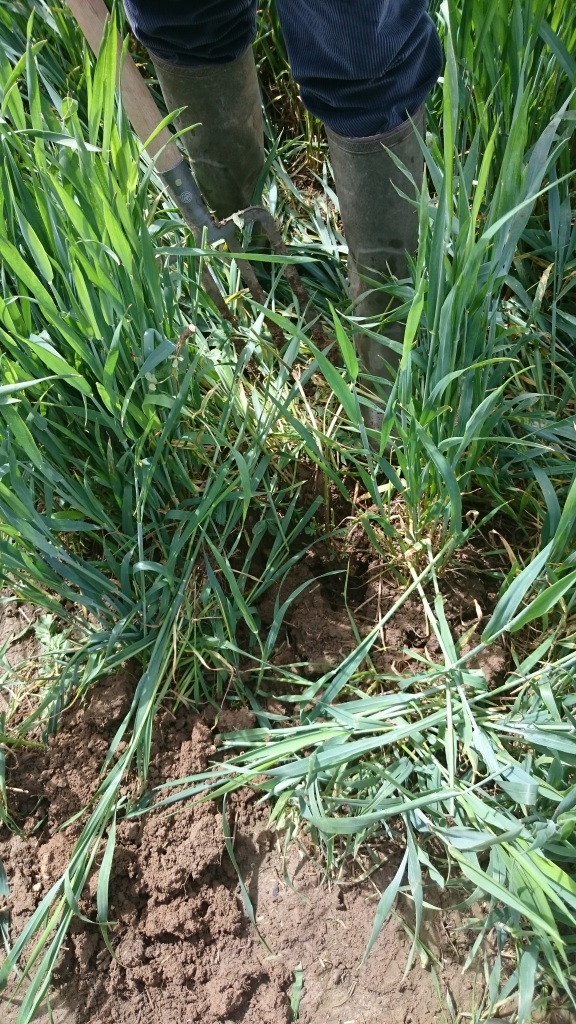 As I said Hubert does not use grass weed herbicides in wheat and he puts this down to no till, double breaks and the mulch. It is also to do with the fact that he is not worried if there are the odd weed dotted around the field as he knows he has 2 Broad leaf crops to control them. Below is a picture of wheat: no till and no grass weed herbicide on the left and cultivated and full grass weed program on the right:

Hubert has found that the best amount of nitrogen fertiliser to use in this system is 100kg/ha and this gives a yield of 8t/ha. A normal yield for the area but nearly half the N fertiliser.

Hubert is also trialling starting the Lucerne mulch in the winter peas: 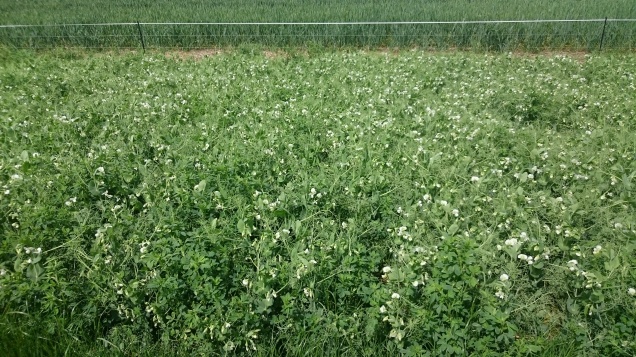 It looks like it is working fine to me.

Hubert also uses white clover on his more acid soils as Lucerne does not like acidity. Below is a picture of clover in the bottom of wheat:

Overall Hubert’s crops were very impressive. What really stood out to me is how little he likes to spend money! He grows these crops so cheaply that if he only gets 5t/ha of wheat he is still making money without subsidy. He uses half the N, half or no fungicide and very few herbicides. A very knowledgable man. He is also very hospitable too. We turned up there a 9am expecting to leave at 12pm but left at 3pm head spinning and stomachs very full (4 courses of good French food and wine!)