So I was lucky to visit Frederic’s farm again only 6 months after being there with BASE UK. For those of you who has not heard of Frederic, he is a farmer in the Sologne, the founder of BASE France, he has a magazine TCS and spends a lot of time training and talking about conservation agriculture. A very knowledgeable and busy man.

To give a bit of history of the area, the Sologne was a forested, mosquito infested swamp. Where the only people who lived there were criminals and rebels. This is why the King decided to build the Chateau Chambord as his hunting lodge as he did not have to force anyone off the land to do it, as no one was there or cared. So this means that the farming is difficult and wet! Frederic, I think he said, is a 5th generation farmer but was not sure of his family history before that, I suggested they were rebels and he laughed. Frederic has been practicing no till for about 20 years on his farm and has transformed his soils. Below is a picture of the soil below a crop of wheat a couple of days after 100ml of rain, looks dry! 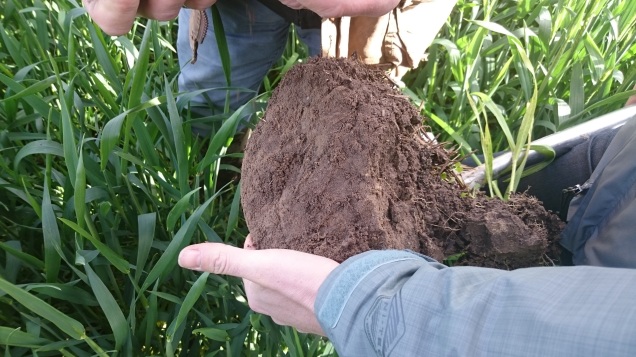 Next we walked to a field of winter barley. This crop has had 150 kg/N/ha early, no PGR and no spring herbicide. 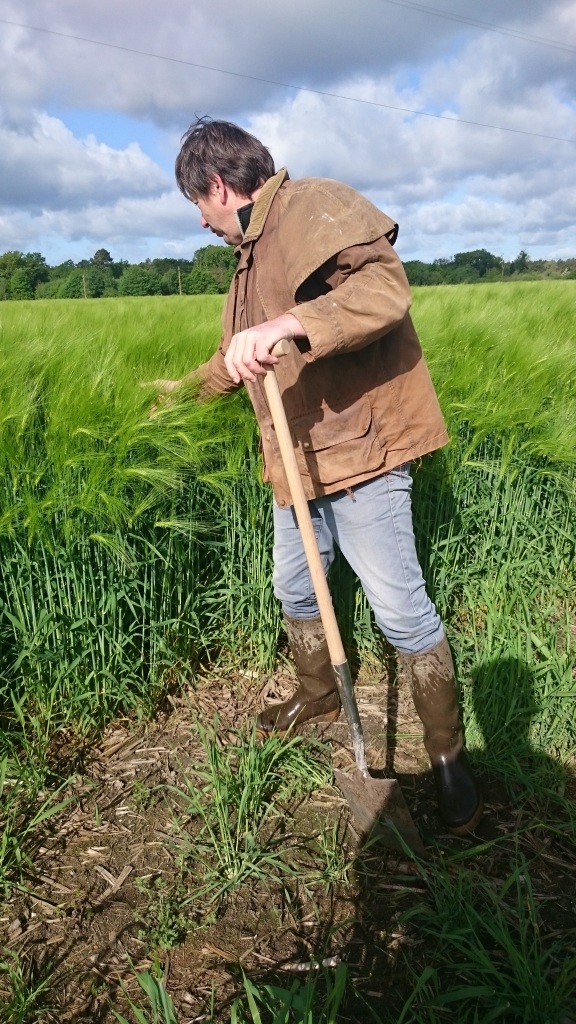 There is also a strip in this field that has had nettle extract instead of a fungicide as a trial. Frederic reckons that the less fungicide you use the quicker the straw breaks down. This is because the fungicide kills the straw decomposing fungi and could also lead to more slugs as there is more food left for them. He also saw better cover crop establishment behind the nettle tea. After harvest he will grow OSR with buckwheat.

Below is Frederic, a proud farmer: 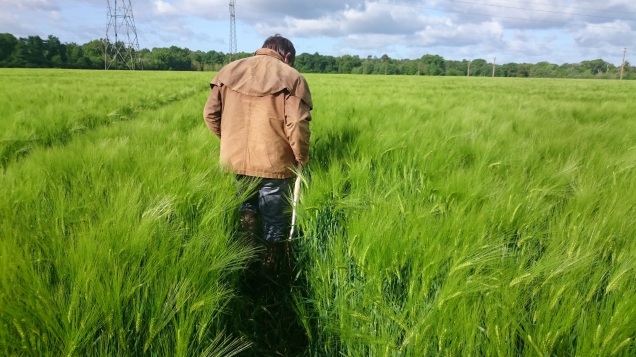 Where Frederic is growing Triticale after harvest he will plant buckwheat with Crimson Clover. Harvest the Buckwheat in the autumn and the clover in the spring and then plant linseed. 4 crops in two years! He is also going to grow buckwheat and soya beans.

We then went to see his corn which was just through:

This corn was planted after a cover of vetch and cereals. Below is his neighbours corn which is not through and a little sad after 100ml of rain:

We also saw some corn planted into grazed clover:

Next we went to see Frederic’s OSR:

This field was planted as a cover crop of cheap OSR seed and buckwheat. Only had a graminicide in the autumn. When he knew it was going to be a crop, it had kerb herbicide and 150kg/N/ha. Nothing else, a very cheap crop. Something to aspire to!

Another thing Frederic talked about was herbicides damaging crops. I heard this a lot in France and I am seeing the evidence on our farm. we really need to reduce their use and use rotations better for weed control as I think they are costing us a lot of money in yield.

Again another interesting visit to Frederic’s farm. I always enjoy my time with him. He is so knowledgeable and generous with his time. After my visit I had a short 400 mile drive home which went smoothly and I am now back in little Olde England