Blake Vince is a Canadian 2013 Nuffield Scholar and seems to be a bit of a minor celebrity around here. Everybody seems to know him. Unfortunately Blake decided to leave the province when I arrived, not sure whether it was on purpose, I was told I had made a lucky escape! (I am sure this is not true Woody) We still had a good nose around his farm even though he wasn’t there to see the man’s work. Blake’s farm has been no till since 1984. Until recently he was also a Pioneer seed dealer but has since left that job and is now planting non-GMO seed and advocating a more natural approach to farming, the Nuffield effect?

The field we looked at seemed to be his trial field

Blake had planted his non-GMO into a green standing cover crop of Rye and Vetch. The idea is to get weed suppression and increase residue cover as above.

He was also trialling with soyabeans 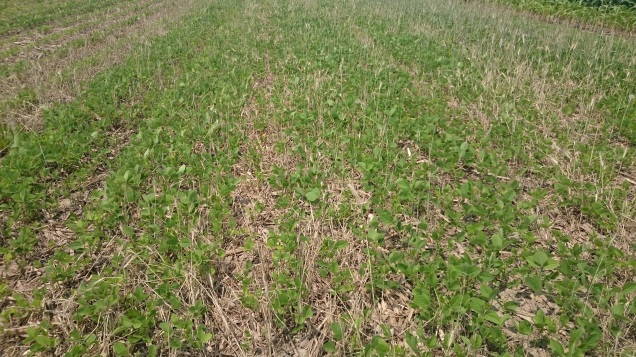 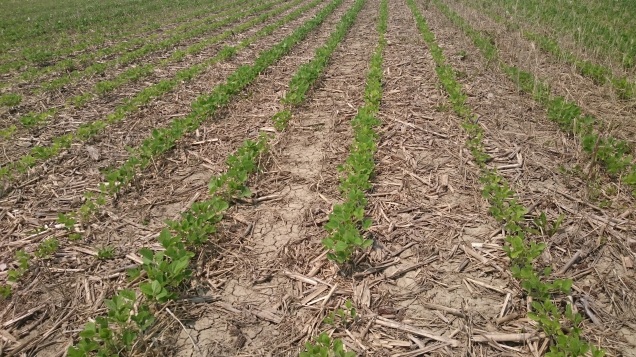 Unfortunately as Blake was not there we could not discuss in too much detail, so if I have got anything wrong blame Woody!

After Blakes we went to have a look around Woody’s crops. Woody is a very modest man and doesn’t think he is doing anything too special but I thought he was doing some fascinating trials. Woody as I said grows Sugar Beet. So I thought I would put a picture in to break up the pictures of corn and soyabeans!

Woody has a small field in which half had a cover crop before corn and has companion crops and the other half is without cover crops. Interestingly the half with covers suffered more from frost and is shorter than the other half. Woody is trying a new mix of companion crop in this field. He is worried about ARG so is trying orchard grass. 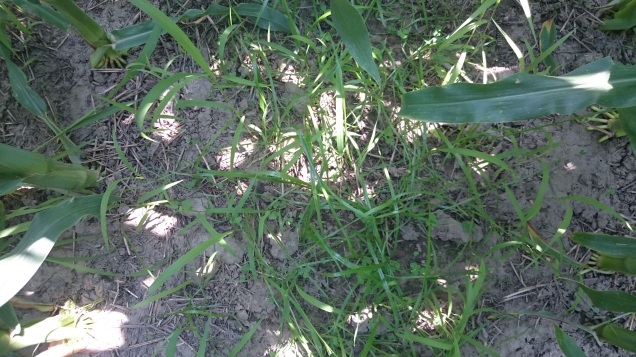 He has used ARG in most places but wants to see how orchard grass goes. He also wants this mix with alfalfa and White clover to be a permanent mulch as see how it does on a small scale to start with.

He is also doing a treatment trial on corn. He is testing for N usage and yield in corn with manure only, nothing, cover crop and manure and cover crop. Each of these treatments also have a zero N plot and other nitrogen rates. He is trying to see how much N he gets from the manure and also the companion crop to then be able to tailor his future N usage.

Below is the machine Woody uses to plant his companion crop 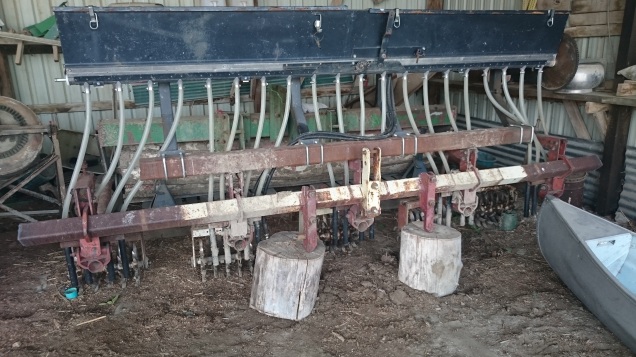 The idea is that along the strip he is going to plant into the cover crop is dead and in between is still alive. So he has a clean surface to plant into. Interestingly he has a plot where he has band sprayed but not stripped and has no tilled corn into that band. This corn looks the same as the stripped corn so maybe the benefit is from the band spraying not the stripping. He will see when the combine goes through.