A few weeks ago I was trying to organise my trip to France and was struggling to find something for Friday and Saturday. So I thought I would look at my French followers on Twitter and send them a message to ask for ideas. The next day I had the day in Switzerland organised with Nicolas and about 5 options for visits on the Saturday in France, all with a Google map with locations and descriptions. I thought to myself this lady is amazing and very organised! Without her help I might have been hanging around Tolouse all weekend with nothing to do.

Alexandra’s husband Yann was on the visit to Geneva too so I had already met him and after my visit with Nicolas I had a 3 hr drive to their farm. Alexandra works for DeKalb dealing with Oilseed Rape seed and seems to travel all over Europe and Yann farms with his brother arable and cattle in the Haute Marne region of France.

In the morning we had a look around the farm. 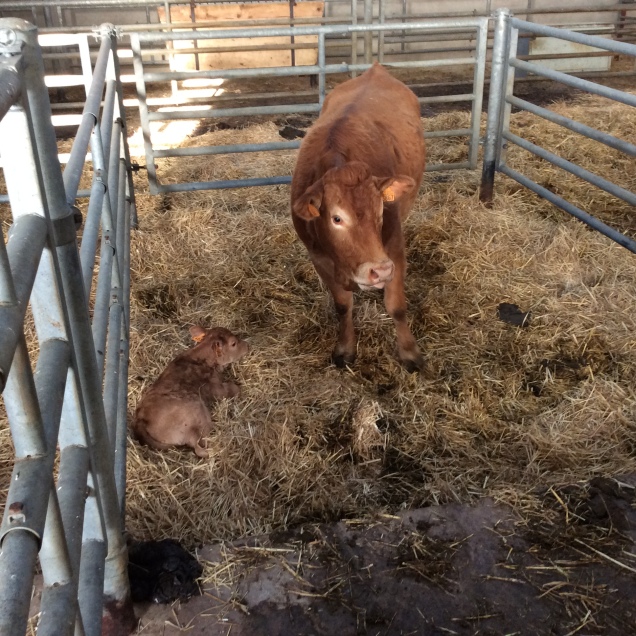 We first had a look around the cattle. This is the first calf of the season. Yann produces Limousine cattle for a specific market. He sells them direct to a butcher who sells them to restaurants in Paris and online. 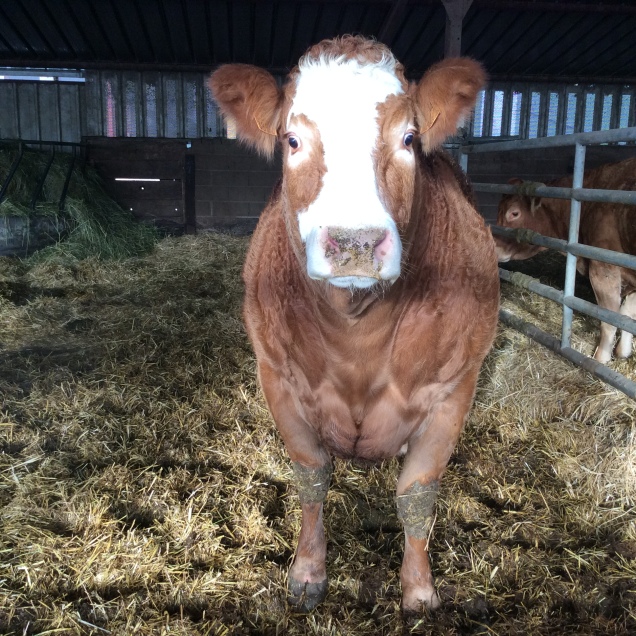 The cows were a good size and to the untrained eye looked very impressive. There are 100 farmers in France selling to this butcher and they have to follow specific  protocols. The first being that they have classical music playing in the shed. The idea is that the animals are relaxed and so the meat is better. Yann has not seen any difference. They also have brushes in the pen for scratching 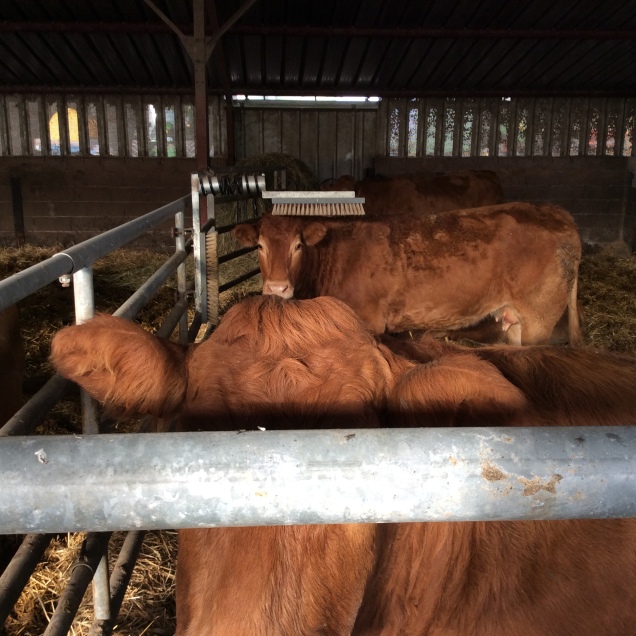 They are not allowed to feed soya or any GM feed. Also not allowed to feed straw due to the worry about pesticide residues so they only use hay. All this means that the stock are very slow growing. To compensate for this Yann receives a higher price. The beef is sold for about 50% more than normal.

We then looked around the machinery. 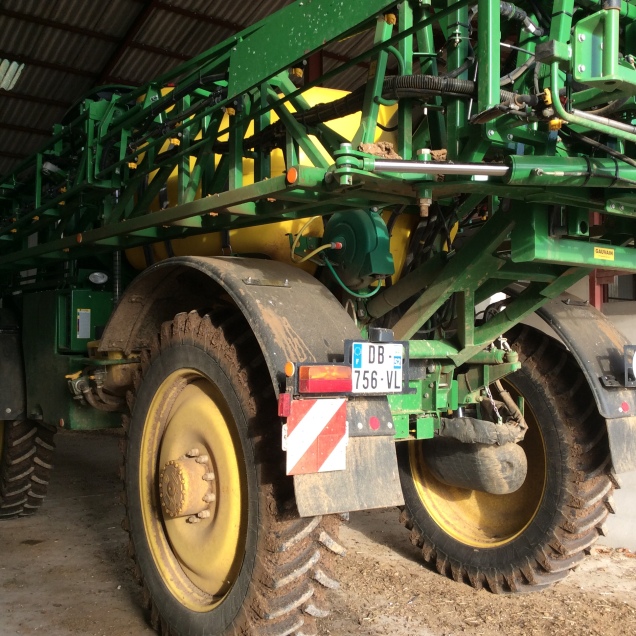 Yann sprays fungicides and insecticides at low does rates. About 50% of the normal rates and only 40-50l of water per hectare. The only herbicide he does this with too is glyphosate. For this to be successful he has to spray very early in the morning and never during the day.

Then we looked at the drill. 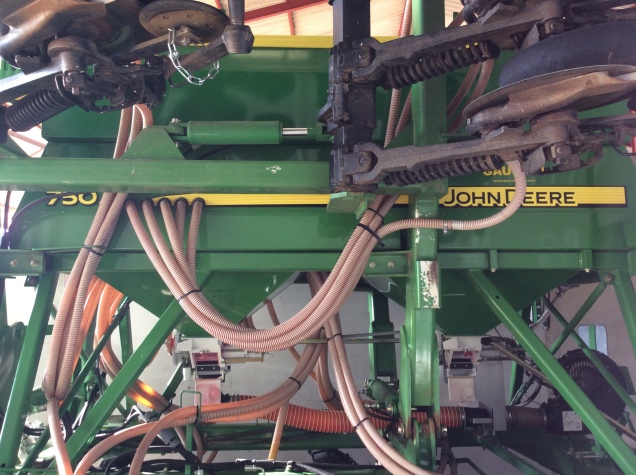 Another JD750a. It is 6m. He drives slowly at about 6-8 kph so to reduce the termination of Cranesbill which is a major problem on his farm. The front tank is for fert and the back one for seed. 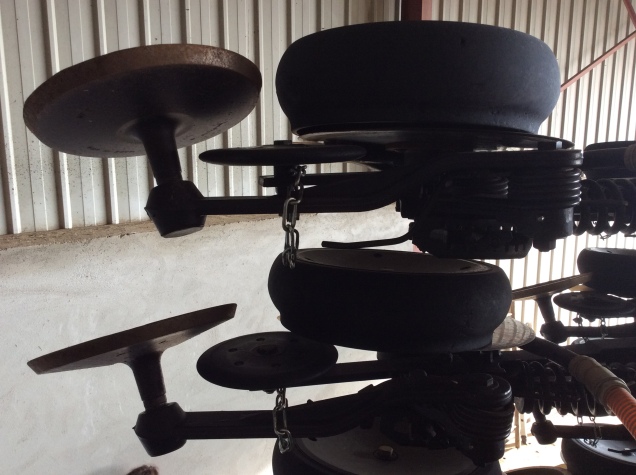 He also had chains around his seed firming wheels. He uses these to hold the wheels out the ground in wet conditions as he finds this allows the slot to close better.

Then we went to have a look at the fields. It seems that mice are a major problem in this area and especially in No-till. They can cause major damage. They eat the crops and leave holes all over the field. 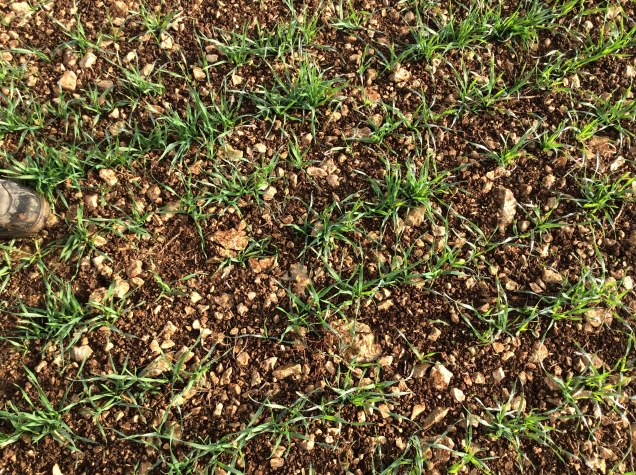 For this reason they have had to cultivate the worst affected fields. This was a very difficult decision as he has been no till for quite a while. The problem is that cultivation brings stones back to the surface again and makes the Geranium and blackgrass problems worse. There does not seem to be an easy answer yet for the mice. They also have wild boar which can cause a large amount of damage. 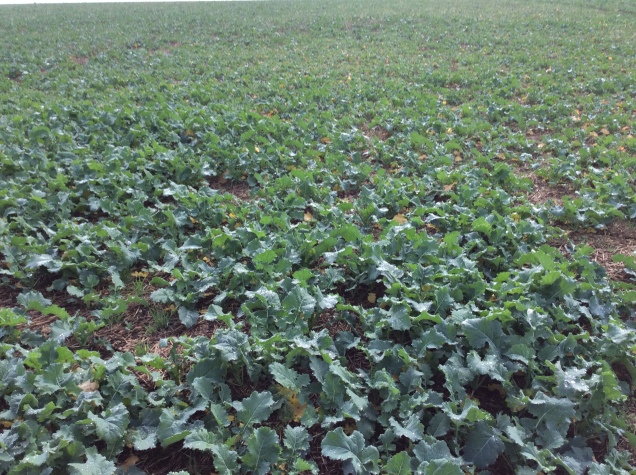 Above is a field of OSR that had to be cultivated for mice control too. It also has had a three way split of geranium herbicide so far. The geranium problem is why Yann has not companion cropped OSR yet even though he would like to. He thinks early planting of OSR with buckwheat can help against the geranium.This year they also had a plague of grasshoppers which devastate some OSR which then was replanted in September.

This year after barley they tried to double crop peas 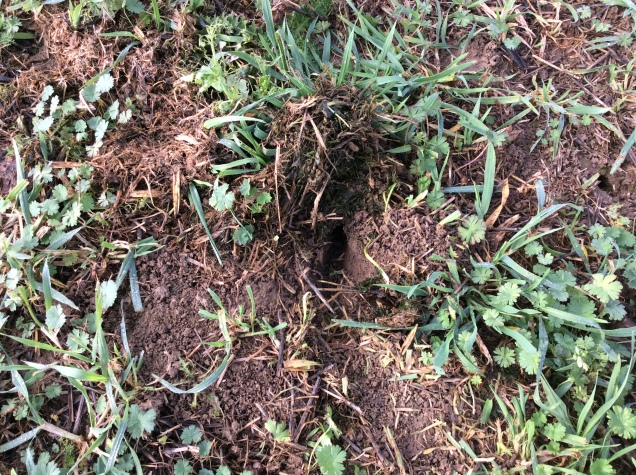 Above is the mice holes. Last year the double cropping worked and they got 2t/ha of peas but this year they got no rain after harvest so the peas did not germinate quick enough. 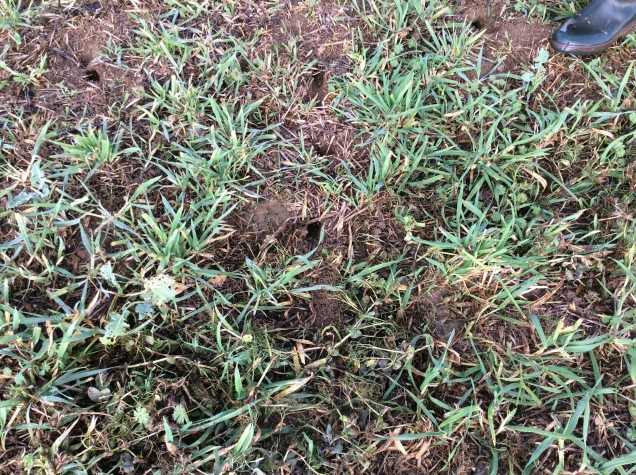 Above they have mowed the cover crop so there is less hiding places for the mice and so the foxes and birds can find them.

The field below is after maize. 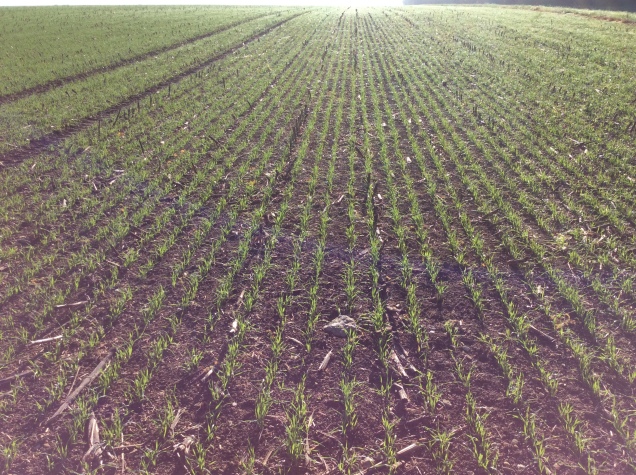 They find that maize is a good cleaning crop for weeds and have no applied a herbicide since drilling. Again though due to the very dry summer the maize was taken for silage as it did not seem worth taking it to harvest as it was so dry.

I had a really interesting morning with the Cadets. Yann is obviously very passionate about Conservation Agriculture but seems to have had some terrible luck recently. I think he will find ways around his problems and I thank him for his honesty. He is not the only one it seems with the same problems. A real issue in France and Germany. We all as farmers know that best laid plans do not always work out. Thank you to you both, without you have my trip wouldn’t have happened!!