After leaving the guys at Mbita we met up with the team from PRI-Kenya and had dinner in the evening with Alais who is a Massai Warrior. Poor Alais had an evening of question after question where we learnt a lot about the Massai culture. It has a very strong community based around sharing, so strong in fact that you are not allowed to eat by yourself or either wash by yourself. Also poligamy is allowed. 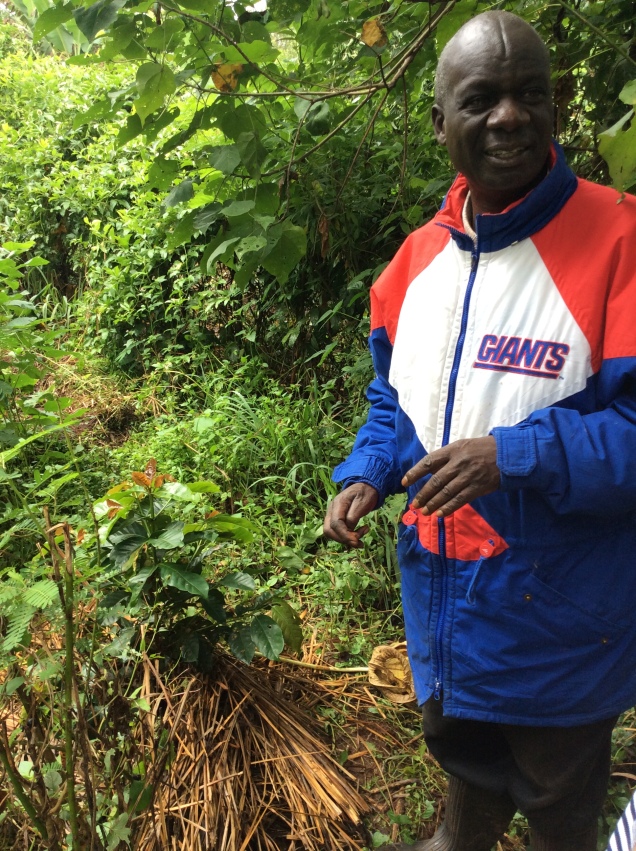 Caleb is a permaculture trainer and is working on this project in Rongo. The project has been going about 6 months and has another two years to run by which time they hope to have 600 farmers practising permaculture. It is called the Sustainable Village Resources program. They are training farmers to do permaculture around coffee growing. Coffee used to be the main crop around here until sugar cane came to the area. Now the sugar cane industry is exploiting the farmers so they are looking to grow coffee again. Coffee is a plant that likes growing in shade and you get a premium for shaded coffee. This is why it makes a good plant for permaculture. The idea is to market the coffee as a group. The group will take a 10% cut and the farmer will get 90%.

Caleb showed us around his food forest.In this forest he grows coffee, vetiva grass ( good for soil erosion, hat weaving and mulching)

He companion crops bananas with pumpkins and sweet potatoes and this is called the banana circle.

He doesn’t grow maize as it is low in nutritional value. Also he says Striga is a sign of degraded soil. Also Caleb has an orphanage on his farm for 12 children. The forest helps him feed the children

After visiting Calebs farm we went to see a farmer called Joseph.

Josephs forest has only been in for 6 months. He has planted pigeon pea as it is an N fixer and pumpkins to try to regenerate the soil. Once the soil improves he will chop down the pigeon pea and plant something else. He has been planting coffee and hopes to harvest by August. Also avocado. He grows chilli peppers which he can use as a spray if insects become a problem.

As with most farms we have visited we don’t leave empty handed. Gordon was presented with the biggest Papaya I have ever seen.

Thanks to everyone at Rongo for their generosity and time.