So yesterday was Canada Day which meant that most people were not working but were partying. This meant it was not easy to find someone to visit but luckily Colin agreed to visit with me in the evening. So in the morning I played golf and then had a four hour drive to Colin’s. It was worth the long drive.

Colin is the only farmer I had found that was intercropping on a large scale for a long time and so I wanted to go and see how he does it.

I first met Colin at his grain bins. They are arranged in a circle.

Then in the middle of the circle are two very large augers.

The separator can cope with 70t of grain per hour so more than keeps up with the combine. Colin is combining 5000 acres of which about half are inter cropped.

The separator sits on the back of the truck and this set up means that he can keep up with the combine  and it is realitively simple.

Out in the field we went to see some of his intercrops. Below is Pigeon Pea, Canola and Lentil.

The lentils are in there in the bottom. The crop has had one herbicide, 30 pounds per acre of N and no disease control. He has found better results in mixed rows not separate. He also variable rate seeds them so will put more lentils on the hilltops and peas on the bottom ground as they do better there. He plants them all about an inch deep. Overall they seem to yield 30-40% more than a monocrop and that is worth about another one hundred Canadian a Dollars per acre.

The next field we saw was flax and lentils 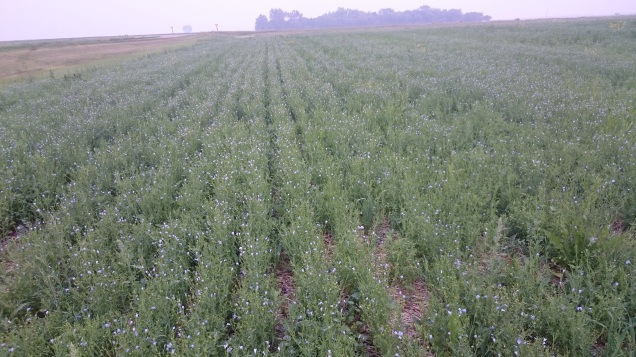 This is receives no nitrogen. The two are harder to separate. The flax holds up the lentils.

We then saw Chickpeas and Flax 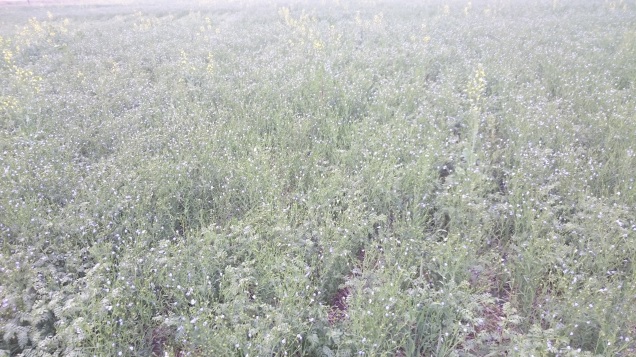 These have received no nitrogen and interestingly enough a chickpea monorop in a wet year will need 8 passes with a fungicide and the intercrop may need two but in a dry year monorop will need four passes whereas intercrop will need probably none!

One of Colin’s other projects is his Clean Seed Capital seed drill. I was not allowed to take picture but you can see the old version on their website. It is basically like a cross slot but more precise. I am not going to go into drills now because it bores me!

Also Colin intercrops Camelina which he then sells to the health food market under the brand of ‘The Three Farmers’. So he keeps busy but in his spare time he managed to built a house in his workshop, which he then transported to the lakeside! 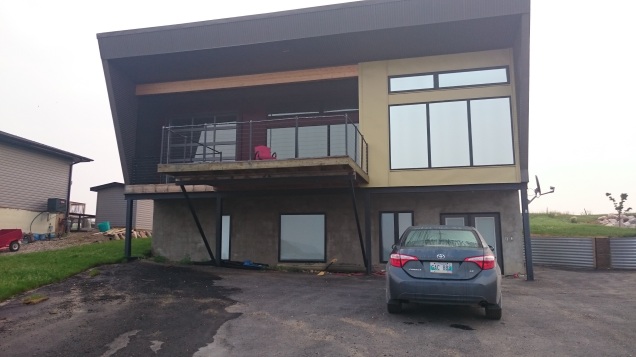 This is where I spent the night by myself. Colin came back after the farm visit and we had a beer and talked all things farming until late in the evening while watching the Canada Day fireworks.

This was my view in the morning 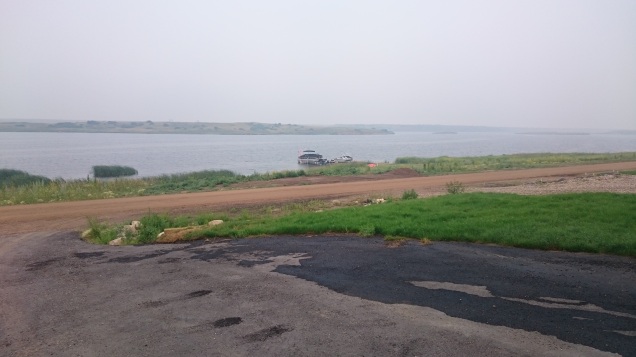 It was not a foggy morning but the haze is due to all the forest fires that are burning. It has literally been blocking out the sun since I got to Canada.

I had a short but great time with Colin and learnt a lot more than I could fit in this blog. He is a real farmer innovator. Thank you Colin and I hope to see you again sometime.