So what is the Nuffield CSC? I am sure that is the first thing most are asking. Contemporary Scholars Conference which is where all the 2015 scholars from around the world meet up, learn, challenge and socialise. The last couple of CSC’s have been in Australia and Canada, so when I found out our was a short train journey away in Rheims, I admit to being a little disappointed. Then I found out Rheims is the centre of the Champagne region and I cheered up!

So what is the Pre-CSC? This is where the UK scholars spend a few days together learning, challenging and socialising, you get the idea. Our Pre CSC started at the NFU conference in Birmingham, then three days in London. One morning visiting the Houses of Parliament and Baroness Byford. Below is our Chairman (the soon to be Lord) Wallace Hendrie entertaining the 2015 scholars.

After London, where we had excellent talks and workshops with people such as Sir Peter Kendall and Allan Wilkinson of HSBC, we moved to Brussels where we were hosted by the NFU. In Brussels we learnt about the “simple” structure of the EU machinations and had a chance to look around the parliament buildings. This room is only used about six times a year, a good fact for all the Euroskeptics out there!

When we got to Rheims we were welcomed by our French hosts with a Champagne reception, yes I know life is tough! That was the start of the CSC official. A week of early mornings, lectures, visits and late nights. One such visit was to an Ethanol and Sugar Beet refinery below. This is owned by a farmers Co-op (9300 members) and also has a state of the art research centre too. Amazing what farmers can do when they get together!

For another visit the group was split into two. One half went to the huge Moet and Chandon headquarters with 1200ha of vineyards (£500,000/ha), robots working in the bottling plant and the other half (myself) went to an 11ha family run vineyard Vazart Copquart. An excellent afternoon learning about the bureaucracy of Champagne and also trying some of the local tipple.

We had a lot of excellent talks by speakers such as Frederic Thomas (below) who tried to convince some Aussie farmers the benefits of cover crops(not easy).

Other talks were on communication and leadership skills.

There were also talks on global agriculture, French Agriculture and the CAP.

I know it might sound like a bit of a jolly but it was also hard work. Lectures starting at  8am and finishing at 6pm with little time for lunch. Getting to know 75 fascinating people from 12 different countries from around the world, all have interesting and varied backgrounds and points of view was a fascinating opportunity. So after some very early mornings, long days and late nights (below), our heads were buzzing with new ideas, new friends and new opportunities.

All these long days and short nights had their casualties

The mental and physical exhaustion was well worthwhile and the CSC experience was a once in a lifetime opportunity and only the beginning of the Nuffield  journey. If you are thinking of applying for a scholarship all I can say is “go for it!”

So Wednesday started at 4.50am, a little earlier than usual. After driving to Tom Sewell’s farm we were kindly chauffeured upto Stoneleigh park by Guy Eckley. This was not an official Nuffield Visit but spending the day in a room with a hundred of the country’s most innovative farmers, I was surely going to learn something. After the formalities of the AGM we were then entertained for an hour by Dr Adrian Newton of the James Hutton Institute.

His subject was cereal variety blends. Something that I have been looking into for a while and the simplist form of companion cropping. Well after listening it is not so simple! Some benefits of cereal blends are: 50% less disease, less lodging, higher yields, more even yield. Some other points are: malsters not interested in cereal blends, crude mixing can be better than a homogeneous blend, mixtures don’t work as well in high disease years. The James Hutton institute is just starting some cereal-legume intercropping trials which is right up my street and so I am hopeful for a visit to Scotland soon.

Our next speaker was Tom Sewell the 2012 HGCA Nuffield Scholar, my friend and mentor (I have still not told him he is my mentor yet!) Tom’s report can be found  at the Nuffield International Website, well worth a read. One thing that stood out from Tom’s talk was a picture of Victor, a Paraguan farmer, who has put his children through university and built his own house all from 15ha of farmland which he intercrops, very inspiring.

Next speaker was Robert Richmond a dairy farmer and also Nuffield a Scholar. He farms in the Cotswolds and feeds his entire organic herd from pasture. He also grows mixtures of oats and beans for whole crop. Companion cropping and intercropping really is just as relevant to livestock farming as well as arable farming. Below is a picture of Rob’s pastures before grazing. His dog in in there somewhere. (Apologies for the picture quality, I didn’t want to use my flash and blind the speakers)

Our final speaker was BASE’s secretary Steve Townsend who is a No Till consultant, soil consultant, plant nutrition consultant and probably lots of other things I have forgotten. His subject was compaction. Steve talked about the difference between chemical and physical compaction. How tillage always causes soil structural problems and how carbon is the driving force behind soil health. The slide below shows how much CO2 is emitted from increasing depths of cultivation. Very worrying considering how much of the countryside is currently laying bare.

Overall it it was an excellent but tiring day. Thanks Guy for driving.

Today I spent the day listening to Dr Dwayne Beck of the Dakota Lakes Research Farm, South Dakota at a BASE UK (www.base-uk.co.uk ) meeting in Baldock, Hertfordshire. 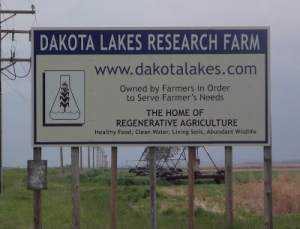 Dr Beck’s main interest is in no till, cover crops and especially rotations. During the day he highlighted the importance of very diverse rotations including stacked rotations. He highlighted the importance of having a rotation containing warm season broadleaves and grasses and cool season broadleaves and grasses. He also emphasised the importance of having a two year gap between crop types not just one, which is commonplace here. For example: winter wheat, maize, spring peas, Winter OSR, Winter Barley, Spring Oats, spring linseed, Winter Beans. The above rotation is very complex and may not be practical but it has 2 broadleaf crops followed by 2 cereals but also two winter crops followed by two spring crops. The idea is that it allows you 2 years to get on top grass weeds in the broadleaf part of the rotation and 2 years to get on top of BLW in the cereal part of the rotation. The mixing between drilling dates and harvest dates stops predictability, so weeds are always guessing along with insects and disease. This type of approach has been shown to dramatically reduce weed pressure and also input costs. 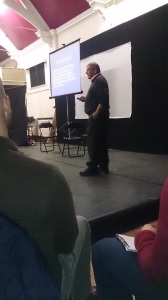 Also Dr Beck talked about seed balls. The this is where you coat seeds in a clay substance and then broadcast the seed so need for a drill. The idea is the coating makes the seed weatherproof and more likely to germinate, which is always a problem with broadcasting. I like the idea of no drill. It would be the end of the “which drill is best debate”, hallelujah!!

Dr. Beck is also experimenting with intercropping. He is growing forage corn and forage soyabean together. Also Corn with a living mulch of Alfalfa. My ears really pricked up at this point as this is what I am studying on my Nuffield. Dr. Beck has kindly offered to show me around Dakota Lakes farm so off to South Dakota I am going!

Www.dakotalakes.com is the research farm’s website and there is a lot of information on this site in the publications section. Well worth a read. Overall a productive day spent with 100 other like minded people.

This was a last minute decision to go to the National Soil symposium:

The Organic sector are having to find novel methods of controlling weeds, pests and diseases as they can not use many pesticides. I hoped being at a conference with a few hundred farmers and researchers I might get some ideas and meet people involved in companion cropping. I was not disappointed. I met Dr Henry Creissen of the Organic Research Centre (www.organicresearchcentre.com) and hope to visit to Wakelyns later this year to see the work they are doing. He also told me about the OSCAR project which is a worldwide research project (@THEOSCARProject). This will hopefully lead to many useful contacts around the world.

I also met John Falconbridge of Western Seeds (www.westernseeds.com). Western Seeds market combi-crops which are intercrops of cereals and legumes. Exactly what I am looking to study, so hopefully John and I can continue our long chat another day.

Overall it was well worth spending four hours there and back in the car to get to this conference and I look forward to following up the contacts I made.

After a long journey (5 minutes!) I reached the Ashford International Hotel with Philippa and Charlie. Yes we bought a six week old baby to the pre-conference briefing, maybe a first! He was very well behaved and so was Philippa. It was the first time I met the rabble below: 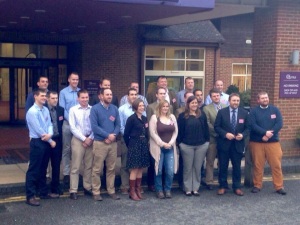 The group of Nuffield Scholars 2015 will be a group of people I get to know very well over the next couple of years and hopefully become life long friends. After the briefing day we went to the bar to get to know each other better over a few beers.

The next couple of days was spent listening to all the 2013 scholars presentation, with my friend Tom Sewell going last (Tom inspired me to do a Nuffield and as a thank you I have hired him as my unofficial mentor, I just haven’t told him yet!). It bought home the enormity of the challenges and tasks ahead but also great excitement of the adventures to be had. We were also presented with our awards, handed to us by The Duke of Gloucester. I was on stage with Jonathon Tipples the Chairman of the HGCA, my sponsor.