After visiting Gabe Brown I had a quick visit with Jay Fuhrer of The NRCS at Menoken Farm. 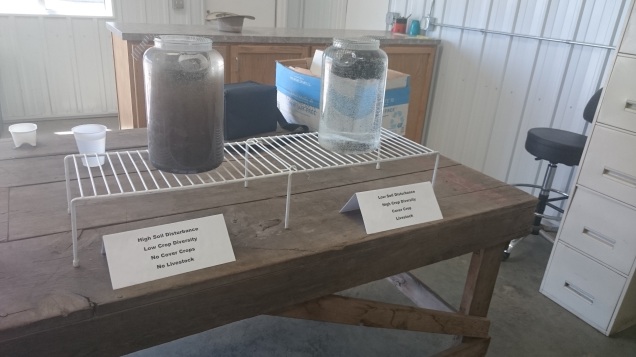 The first test above is the slake test. He put two different soils into each jar. One jar had a soil that had been under full tillage, no cover crops, low crop diversity and no livestock on the left and the other is no till, cover crops, high crop diversity and includes livestock on the right. As you can see the soil on the left falls apart and disintegrates whereas the soil on the right stays intact. This illustrates that the soil on the right has Glomalin glue to stick the soil together whereas the other falls parts when you get heavy rain and is off down the river causing soil erosion, nitrate and phosphate pollution. This degradation happened within minutes.

The next test is the infiltration test. Same difference in soil but this time the same amount of water is poured on top. As you can see the one on the right infiltrates water through it quickly so if there is rain it does not run off. You still get nitrates run through that soil but that is why you always need a living root to catch the nutrients. The one on the left hardly infiltrates and in the real world would run off.

Unfortunately the one third from the left had a big hole in the bottom so more infiltrated than should have. I was Jay’s guinea pig for tuesday. Though you can see the two middle ones had dirty water and the outside ones were clean. Obviously you want infiltration and if there is run off for it to be clean.

The final experiment was the rainfall simulator.  There is a water nozzle above the different soil which applies an inch of rain and the results are below.

After the soil demos we had a look at the field around the farm. 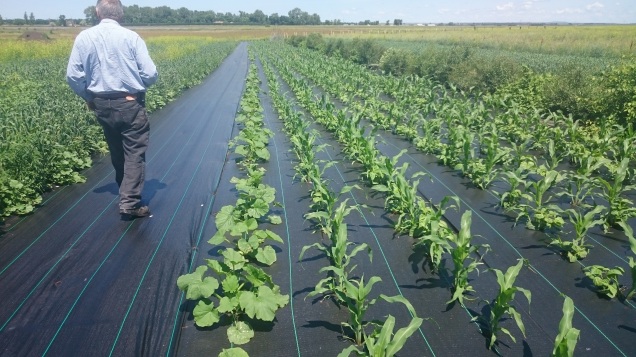 The first is a plot of the “three sisters” which is pumpkins, sweetcorn and beans. These will be picked and the food go to the local food banks.

The second field we went to was a sunflower field which had in between the rows a cover crop mix. The idea being the cover crop mix feeds the sunflowers. 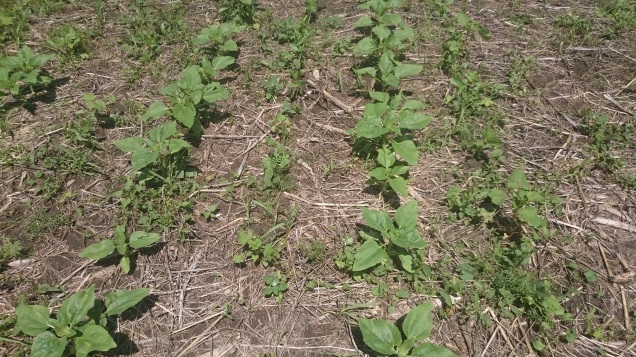 Then we went to a Soyabean field 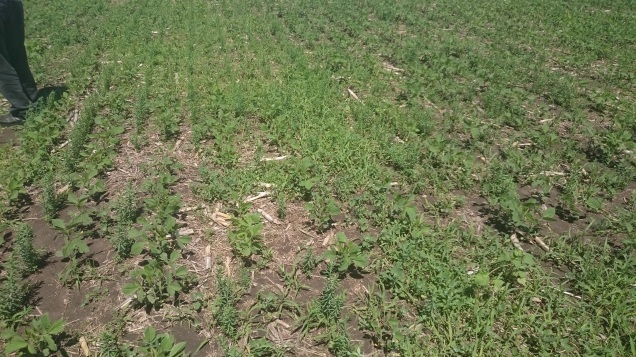 This also had a cover crop mixed in to feed the soya beans and attract beneficials.

They are also growing a continuous wheat field and the picture below shows the difference between the soil.

As you can see the companion cropped sunflower soil is darker and crumblier than the continuous wheat. They have both been no till the same time the difference is the drop diversity increasing soil carbon and soil health. Also the sunflower has received no nitrogen fertiliser and the wheat field full application which demonstrates that artificial  nitrogen can burn off soil carbon.

I had an interesting few hours with Jay and unfortunately could not hang around as I needed to get to Canada. Jay was my last visit in the US and was fascinating. I am sure I could have learnt more if there longer. Thanks for your time Jay.