Sarah Singla used to be the Nuffield France President until July and so I was lucky enough to meet her in France in February at the CSC. It was through Sarah that I managed to gate crash the meeting at Christian Abadie.

Not only is Sarah a farmer, she is an an educator of Sustainable Agriculture (the previous day she had been in Paris training agronomists and tomorrow is going to Montpellier to teach agriculture students) and also a consultant from time to time. Sarah is only 30 years old and is wise beyond her years. She was a Nuffield Scholar in 2012 and her subject was fertilisation in No till systems. She farms 100ha of arable that she took over from her Grandfather. It is at 800m altitude and the area is mostly livestock farmers. Sarah is one of the few arable farmers.

Below is the first field we went to see

This is a field of no till wheat. The previous season was a cover crop which she then sold to a neighbouring farmer. Then she planted buckwheat which yielded 2t/ha and then into wheat. The only herbicide used was a litre of glyphosate to defoliate the buckwheat. In the spring the wheat will probably get one more herbicide.

The second field we saw was Lucerne planted with faba beans, vetch, peas and was seeded 3 weeks ago

The idea of adding the other species to the Lucerne is because it gives you more biomass on the first cut. This crop will be sold to a neighbour and Sarah gets back manure. This field will probably be the same again next year. Ideally she would have liked to add a grass to the mix but the sheep farmer did not want her to. Also the adding of the other species stops the crop being a monoculture which is one thing Sarah tries to avoid. She says that this field will give her a better Nett margin than some cash crops even though it may not give a better gross margin. Once you have added machinery costs and time into the cash crop the nett margin is lower. This method also is simple for Sarah as the crop does not need any attention and is harvested by someone else. 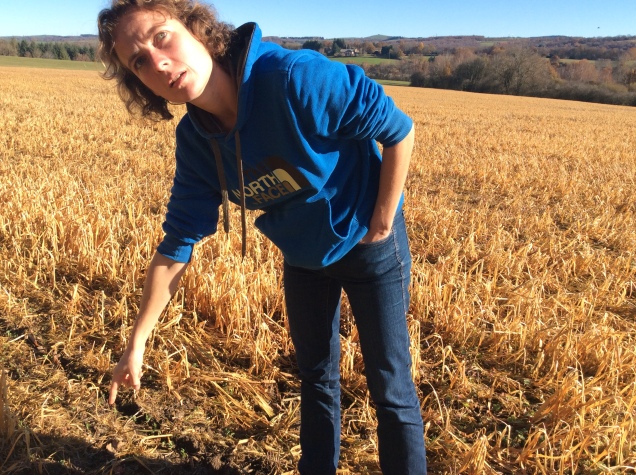 Below Sarah is pointing out the mice damage. She has found it a problem on some fields but not every year and not every field.

Sarah’s farm is one of the longest farms in No till in France, it has been no till since 1980. Longer than Sarah has been alive! 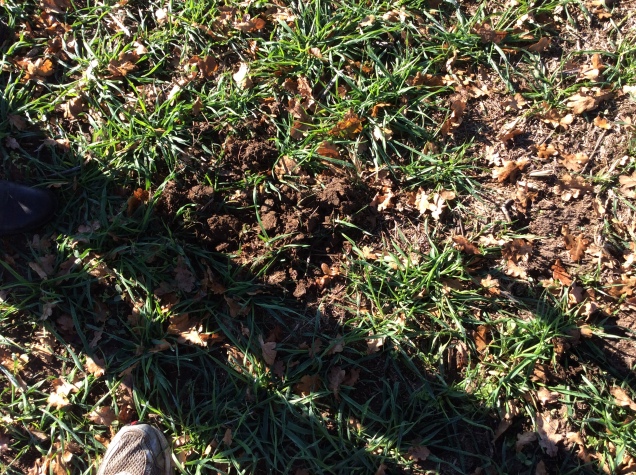 The soil is dark and has a beautiful texture even though it is sandy. Sarah goes triticale for seed and this harvest got 9t/ha of triticale from 130 units of nitrogen. Sarah is trying to simulate Christian Abadie’s farm ideas of more than one crop per year and her next idea is to plant vetch and peas with her winter wheat. Cut the crop in March for silage and then let the wheat grow on to harvest. A great idea.

Sarah is very keen on looking at farming systems and using tools like no till, cover crops and companion crops to improve the system. She does not believe that recipes that work for her will work for everyone and each farm is different, the climate and goals are different. You need to understand the principles and the biology of each plant and then apply what works best for your farm in your area. She is also not scared in failing.

This is her biggest tractor. She owns a 12m sprayer, 3m Semeato and a fertiliser spreader and that is it! She believes in the sharing of machinery and that we don’t all need every machine. Her machinery depreciation would certainly be low!

She believes the more species in the mix you have he better results you get.

This visit was the perfect end to an excellent trip. Sarah has a very balanced view of farming and sees farm systems and how each part complements each other. She was a great host and a real inspiration.