My official first trip of my Nuffield scholarship involved grappling with the motorway system at 5.30am and it was shut! So country route it was for the last part of my journey. My destination was Farmcare in Leicestershire to see the Agrovista Companion cropping trials with Mark Hemmant, Technical Manager, as my host. In their trials Agrovista are experimenting with different establishment techniques, seeding rates and seeding mixtures with interesting results. 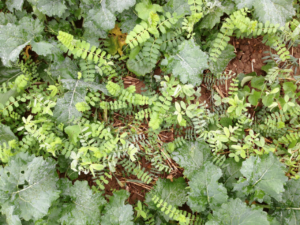 Mark prefers using Berseem clover as a companion due to its deep rooting properties where is I a few years ago struggled to get Berseem clover established. They have reduced seeding rates down to as low as 5 kg per hectare and still seen an advantage from companion cropping. When seeding rates are down to 5kg/ha the seed is applied in the  OSR row at drilling compared to higher rates of companion seeds being broadcast.In fact they have found that there are more advantages to having seeding rates low compared to high due to the higher seedrates possibly competing with the Oilseed Rape.They have found better establishment from companion cropping, this they think it’s due to less slug problems. Also they have seen OSR rootneck increase in size in companion cropping and last year seen a yield advantage of up to half a ton hectare in companion cropping compared to without. They were also comparing establishment techniques of companion cropping and they found that the best established achieved from broadcasting was with spreading of the companion seed before drilling and tickling the seed in with an adaption on the drill.

After visiting Farmcare we went for lunch. We started at MacDonald’s for adrink  and then went to a local pub for big plate of pie and veg! If this is how my lunchtimes are going to be on my Nuffield visits then I may need to run another marathon!

After lunch we visited Agrovista’s cover crop and blackgrass trial. At this site agrovista trialling the use of cover crops with species of vetch and black oats to control blackgrass by drilling a little bit later to allow one flush blackgrass before drilling and then drilling the oats at low seed rates which allows the blackgrass to come through with the cover crop.

The idea is that you get blackgrass growing with the cover crop and this helps lower the black grass seed bank. They have had success and have achieved lower blackgrass emergence in the following spring cereal compared to multiple overwinter stale seedbeds. The interesting plot for me was an early drilled mix with Phacelia. This had virtually no blackgrass growing in the bottom. It will be interesting to see which plots are cleanest in the spring crop.

It was interesting first official visit and many thanks to Mark for taking the day to show me around.